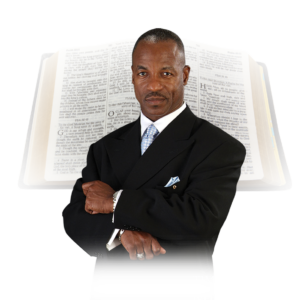 Apostle Timothy Moore was born in Baltimore, Maryland to the Late Deacon Wallace and Martha J. Moore. He is married to the beautiful Evelyn Denise Moore and has two daughters and two sons: Qwinnteast, Knicole, Christopher Michael, and Joshua Moore. He received his education in Baltimore City Public Schools where he graduated from Fairmount Hill High. He was blessed with the talent of music at an early age.

He has played music around the United States professionally as a guitarist and vocalist, and later became a record producer. He produced such groups as Douglas Miller, Timothy Wright, Bibleway Choir, Little Cedric and The Hailey Singers, Singing Disciples, Supreme Voices, Heaven Bound, and received a Stellar nomination 2002 for producing Doc Mckenzie and the Hilites “Hold On”. He is a member and the founder of the recording group “New Street.” He took Biblical Studies at the Baltimore School of the Bible, private guitar at the Peabody Institution, General Studies at Baltimore City Community College and Prince Georges Community College, and received a Bachelor of Science from Lancaster Bible College, and an Honorary Doctorate from Ever Increasing Word Training Center, Apostle Leroy Thompson, Senior, Founder.

He was saved at an early age and was called to the ministry at the age of nine, but did not accept his calling until 1985. In 1992, he was licensed as a minister under his pastor and spiritual father, Bishop Clifford M. Johnson Jr, Senior Pastor of Mount Pleasant Church & Ministries. He was ordained by GOD to his apostolic anointing as Pastor and Church Founder by Bishop Don D. Meares, Senior Pastor of Evangel Cathedral. GOD used Timothy Moore as His vessel to birth the vision of Life Music Christian Fellowship Church, where JESUS CHRIST uses him as Founder and Pastor. He ministers in the area of Church Planting, the Prophetic Levitical Order of Church Ministry, Evangelism, and Indoor and Street Evangelism. Apostle Moore has enlightened many lives and has drawn thousands to the Body of CHRIST around this nation through The WORD and music.

His profound teaching on the “Greater Works of the Church” has released a hunger for GOD’s people to reach the level of Anointing that CHRIST desires His Church to flow in, which is moving in the “Power of GOD.” He is the author of the book “Purged into HIS Purpose”. Apostle Moore is one of the Gatekeepers in “The Peace For The City” fellowship. He serves as a member on the Executive Council of International Congress of Churches (ICLC). His desire is to turn the world up side down through the Prophetic Preaching and Teaching of The WORD OF GOD, which goes Beyond The Surface.

Apostle Moore also ministers music through the POWER of GOD and The HOLY GHOST! One of his favorite verses is Romans 15:13, “Now the GOD of hope fill you with all joy and peace in believing, that ye may abound in hope, through the Power of the HOLY GHOST.”